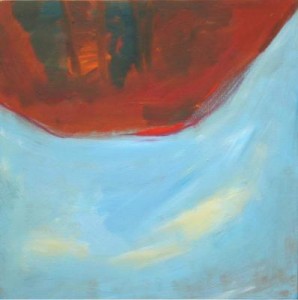 Pearse describes the challenge of working traditionally with paint and canvas, using it to say something new. Her work relates visually to the landscape she depicts, but, by way of her contemplation of the landscape and her knowledge of artistic form, she is able to stylize and abstract her colour and form to produce a sophisticated composition. Shapes are often simplified: hills become arcs, dams assume a square shape, the foliage of trees become circles, roads and rocks become horizontal or diagonal forms. 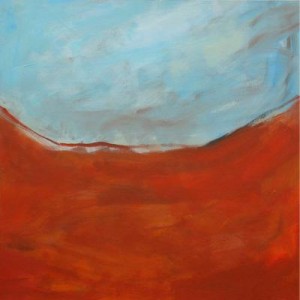 Pearse says that although she always creates her images the ‘rightway up’, she wants them to be readable in any direction and checks them for balance by looking at them upside down and sideways. This awareness of form results sometimes in works that challenge reality and readability, such as Reflections – Clouds on Water, Trees on Sand (Northern Rivers Arts Quarterly, Autumn ’06, p.4) and sometimes in works that emphasise form by repeating reality, such as Mr Curley was here (Northern Rivers Arts Quarterly, Autumn ’06, p.1). Similarly a diptych, such as Hills at Skinners Creek, can be read as a landscape or as a pleasing abstract work if its two pieces are reversed. 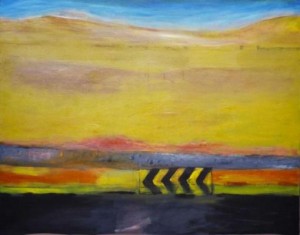 Pearse’s incorporation of a depiction of road signs in some recent landscape paintings reflects her visual response to what she sees, but also creates a slightly surreal experience for the viewer of her work, when the expected landscape is interrupted with arrows, road works and signs. Some of these work are reminiscent of Jeffrey Smart’s depictions of industrial cities, and use a similar painterly style to depict the hard-edge signs as Ildiko Kovacs (Ildico Kovacs, Roadworks, exhibition, Martin Brown Fine Art, 30 November-18 December 2005, catalogue), but Pearse is unique in using the signs in relation to the landscape. In her large work Big dry in passing, 2005, (done for the Country Energy exhibition), blurred signs in the lower part of the painting conjure up the often disinterested view of those in a fast-moving car and contrast the busy movement of the roadway with the serene landscape in the upper part of the painting.

Pearse moved to Byron Bay from Sydney in 1995. Although she had painted in many coastal and inland regions including the sea around her home in Sydney, sailing trips on Sydney Harbour, New Zealand, the south of France, and southern NSW, she says it took her a long period of adjustment before she was able to relate to the lushness of the local subtropical landscapes.

A series of works, Australian postcards, begun in 2001 and still continuing, show the artist’s absorption of the Australian landscape. The series started with depictions of the area between Sydney and Wagga Wagga, a result of Pearse’s fascination in the landscape of that area when she saw it for the first time. As the series continues Pearse has been depicting more of the Byron Bay area using the same simplified forms to describe the subtropical. (The first works of the series were exhibited at the Waywood Gallery, Byron Bay, in 2001.)

Pearse describes this series of works as a reflection of her relationship with place, her memories and her feelings. The titles of the works were collected from other Australian localities. This and the series title ‘postcards’ give the works an ironic character. While ‘postcard’ evokes a pretty scenic view, Pearse’s works, such as Black clouds over Hangman’s Hill, with its title, its simplified form of three diagonal bands of colour in the foreground, three stylised trees, two round dark clouds, a flattened fence, and its muted yellow, brown and grey colour, looks little like the usual postcard. 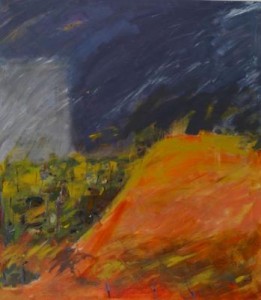 The artist’s dialogue with the viewer of the work is not so simple, however. Further viewing reveals a lively subtlety: the yellow glows by way of slight variations of colour, the browns becomes enriched, the clouds dance rather than threaten, the flattened fence evokes a similar feature in a painting by Grace Cossington Smith; the ‘postcard’ becomes, like its namesake, a souvenir of an interesting site. Australian Postcards, now numbering 30 to 40 works, contains many gems of works, such as several depicting rain veils. In Rainveil near Brown’s crossing, Pearse has captured the extremely transient quality of light before a storm. A red hill in the fore ground glows in clear light while a palpable darkness looms behind. The mist of approaching rain can almost be smelled.